A Brief History of Pontiac, Michigan 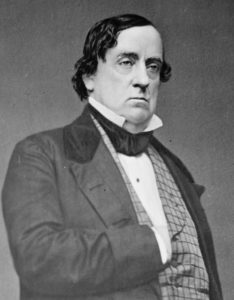 In 1817, Lewis Cass was in a bind. In 1814, he had been appointed the governor of the newly minted territory of Michigan, and he faced some serious challenges.

A survey of the Michigan territory undertaken in the spring of 1815 had labeled it an “interminable swamp”, making it nearly impossible to sell any land. The survey was conducted as part of awarding bounty lands to veterans of the War of 1812, and while some bounty lands were awarded here, most (at least a million acres) went to Illinois and Missouri. That’s not good.

A volcanic eruption in 1816 caused major havoc around the world, causing the “Year Without A Summer” and mass starvation was a real problem on the East Coast. He needed to get some people moving into his territory, and soon. No pressure, though.

He had concluded some major treaties with Native American tribes, relocating them westward, opening the territory to European settlement. Westward ho, manifest destiny, and all that (well, not yet, really, but you get the idea).

Now, all he had to do was convince people to move here. So the Honorable Mr. Cass took some steps.

He ordered the territory resurveyed, this time in the fall season, which proved once and for all that the southern half of the Michigan territory wasn’t really all that swampy – it was actually good, open prairie land.

He ordered, and then undertook, some expeditions into the inland territory, around what is now Oakland County. He collected his good friends around him, and offered them new opportunities in the territory. He published articles in “his” newspaper in New York, the Detroit Gazette, advertising the wonders of the Michigan Territory (he may have oversold it a bit).

One of the many steps he took was to plan for a military road between the Saginaw Valley and Detroit to quell Native American unrest and protect settlers in the territory.

Now, everyone knows that if you’re going to build a road through unsettled territory, you better have some places along it for people and horses to rest. It was at least a week’s journey from Detroit to Saginaw, after all.

Which is why he asked his friends to settle a town.

The town of Pontiac was founded on the 9th of November, 1818, by a group of investors from the then-small town of Detroit. They called themselves “The Pontiac Company”, and it is clear from historical records that settling the town was a well-planned and executed series of events. The town’s location was assessed, the land purchased, and the town named in a period of about 5 days, which was unprecedented in its speed and efficiency.

Members of the Pontiac Company ranged from a prominent lawyer (Solomon Sibley), a merchants and trade goods dealer (Austin Wing and Stephen Mack), through to land speculators (Shubael Conant, Mssrs Sibley and Wing), veteran officers from the War of 1812 (Alexander Macomb and Archibald Darragh), more lawyers (Andrew Whitney, future Attorney General of the territory), and some surveyors. Most, of these  men had a good friend or business acquaintance: Mr. Lewis Cass, or were related (Augustus Canfield – Mr. Cass’ nephew, for one).

The Saginaw Trail was an important route between the Saginaw Valley and Detroit, allowing movement of goods and services into the interior of the Michigan territory. It also allowed for military personnel to move between Saginaw and Detroit, which was essential to European control of the land – the Native Americans in the Saginaw Valley were not at all happy to have been relocated from their lands. It became essential to the territorial government to establish a town along its route. The town site at Pontiac, where the trail crossed the Clinton, was a natural fit.

The Clinton River, then called the “Huron of St. Clair” (hence the name of one of Pontiac’s main streets, Huron Street) crossed the Saginaw Trail (hence the name of the other main street in Pontiac, Saginaw Avenue). The Clinton’s headwaters are in Springfield Oaks, and it flows west to east, to Lake St. Clair. At the time, it was a fast flowing, cold river, with steady flow and a good width. The Clinton was an important route for early settlers, providing not only passage into the county, but a very good source of waterpower for milling and for transportation to the territory’s coast and to trade in Detroit and other towns along the lakes.

Milling was a critical part of settling a town, and the location chosen by the Pontiac Company was not arbitrary. Within a month of the founding of the town, work had commenced on building a sawmill and flour mill to support the new venture. Town plots were donated to tradesmen willing to relocate there. A blacksmith, a wagon maker, and other trades soon began to move into the town and to commence trade.

By the beginning of January, 1819, the process of naming Pontiac as the county seat of a new county, called Oakland, was well underway, and in that month Lewis Cass created the county and named Pontiac its seat, by proclamation. In March of 1820, another proclamation was issued by Cass, naming the officers of the county and establishing it as a functioning government, although it would be a few years before the county actually began administering its own affairs.

Locating the county seat at Pontiac was a major step forward in the evolution of the territory, and it’s fairly clear that the town’s location was an essential part of that decision. It needed to be reasonably centrally located in the county, located on good dry land, and easily accessible by land and by river. Pontiac’s location suited these needs very well, and it wasn’t long before Pontiac was a major trade center in the new territory. Farmers bought and sold grain, livestock and other farm equipment here. There were nearby forests with good quality wood available, and there were tradespeople and mills to process trees into lumber and grain into flour.

In 1817, construction began on the Erie Canal, running between Albany, on the Hudson River, to Buffalo, on Lake Erie. In October of 1825, the canal opened and provided the first waterway between the Atlantic Ocean and the Great Lakes. At a time when most bulk shipment was via pack animal, this was an amazing transportation thoroughfare.

By this time, land sales in Oakland County were well underway.  The opening of the canal along with Great Lakes passenger ships arriving in Detroit caused our county to boom in population.

By the 1840s, Pontiac was the largest inland town in the territory, a title it held for many years. A solid road network in all 4 directions had been built. The railroad was running regular routes. All of the services and goods an agricultural community could want or need could be found here.

Part of that growth was the development of the carriage industry, which really took off in the latter part of the 19th century. Pontiac had everything needed to become a major manufacturing center for carriages. It had excellent wood stocks, necessary for making wheels, bodies, and axles. It had a thriving metalworking industry, needed for undercarriages, running gear and components. Its location near the center of the county made it an excellent location to buy, sell and trade horses and tack.

And in 1861, Pontiac was created as a city, one of the few in the state of Michigan at the time. It was a successful, thriving area with many businesses, families, and social opportunities. It had, in short, grown up and become a true destination for Michigan’s (and Oakland County’s) businessmen, settlers and established residents.

And Away We Go

In the middle of the 19th century until its end, Pontiac went through a major transformation from an agricultural trade town to an industrial manufacturing center. As transportation networks improved, Pontiac found itself at the center of the American industrial revolution, and it was well positioned to become a powerhouse of manufacturing. The rise of the automotive industry – and midway between Flint and in Detroit – positioned Pontiac very well to take advantage of this profound growth.

Pulling it all together… 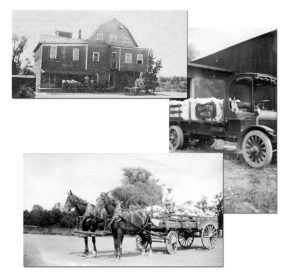 Take a look at this photo collage. It is of Dawson’s Mill, founded in 1852, and its last private owner, Henry Elliott, who sold it to a large milling concern in 1919. It was Pontiac’s longest continuously operated flour mill, and it encapsulates the profound changes in Pontiac throughout the mill’s life. The mill was located on the Clinton River, to the southwest of the town, along Orchard Lake Road.

We see the mill building around 1918 with many changes made through the years – it had followed right along with the industrial revolution, converting from stone grinding to roller grinding in the 1880’s, converting to coal and steam in the 1900’s. By then, it was a turbine driven mill, and even generated its own electricity. It was the first business in the town of Pontiac to get telephone service. It was a merchant mill – teams of horses and wagons would be dispatched to farms in the area, buying entire grain harvests right off the field and delivering it to the mill for grinding.

The wagon you see Mr. Elliott astride was very likely made here in Pontiac. The GMC truck (with old Henry’s dog in the seat) was certainly made here.

It, in its small way, represents the profound changes that led to the Pontiac we know – one of the largest automaking towns in the world for perhaps 7 decades. A center for successful trade of cars, trucks, buses, and bicycles.

Just a little southwest of here along Orchard Lake Road (which was a toll road at the time), was the factory of O.J. Beaudette, a prominent and successful maker of carriage bodies. His business expanded into making over 2 million wood auto-bodies for early Model T Fords.  Later, this was sold to the Fisher Brothers, and became part of General Motors, with operations moving to Baldwin Avenue.

The area that is now M1 Concourse is arguably the birthplace of commercial trucks for the world.  Rapid Truck (later merged into GMC) was so successful as to be shipping to Europe by 1905.   Pontiac’s legacy is very strong, in both automakers and automotive supplier operations. Many of these businesses were combined to create what was for many years the largest automaker in the world, General Motors.