It is the M1 Concourse, which sits on “hallowed ground”. This corner of Woodward and South Boulevard was home to several manufacturing plants with different property owners over time, among them the Rapid Truck Company, Yellow Truck and Manufacturing Company, Flanders Electric, the Wilson Foundry and Machine Company, and finally General Motors. 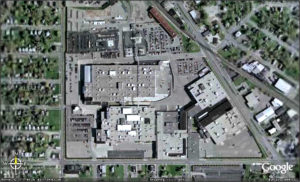 Rapid Truck, arguably the world’s first significant truck manufacturer was started in 1903 on this site.

A view of the Rapid Truck assembly plant after the plant was renamed to General Motors Truck. This was Plant 1, located at 25 Rapid Street. The powerhouse (with the chimney) remains, and was most recently in use as a climbing gym. 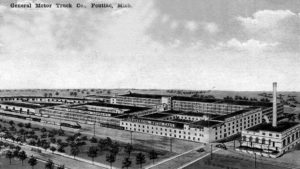 A view of the Flanders Group factory, south of Plant 1, which fronted on Woodward at the corner of South Boulevard. 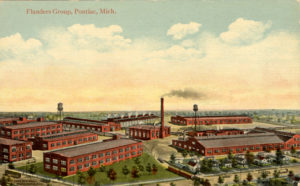 The Flanders Group was very short lived (it was absorbed by Studebaker) and by 1919 the Wilson Foundry and Machine Company was operating on the site. Wilson Foundry was the largest foundry of its type at the time, making engine components for Willys-Jeep-Overland for a number of years. 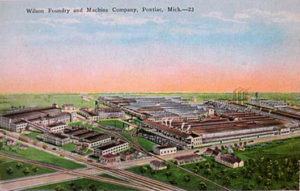 In the 1930’s, General Motors (through its subsidiary Yellow Truck Manufacturing) began purchasing the Wilson Foundry plants, and in 1943 renamed the company General Motors Truck and Coach.

Over the decades, these plants employed tens of thousands of automotive workers, and the factories that operated there are well remembered.

13 thoughts on “10. That looks like the new “M1 Concourse” racetrack in Pontiac right?”